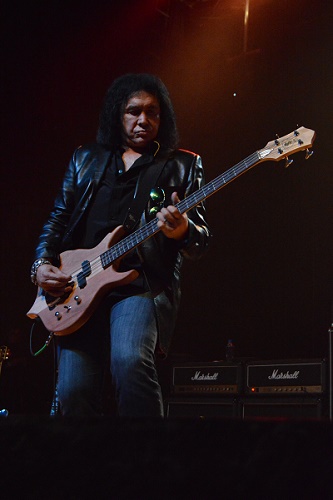 Legendary Rock Icon Gene Simmons continues his partnership with Wizard World through August with a new added stop in Chicago. For many of you reading this, it is the chance of a lifetime for musicians all across Greater Chicago, as famed Rock and Roll Hall of Famer Gene Simmons and Wizard World seek an outstanding local band to perform as one of the opening acts for "Wizard World: An Evening with Gene Simmons and His Band," Saturday, August 26, beginning at 8 p.m. (doors open 7 p.m.) The concert will take place at Park West (322 W. Armitage Ave.) in Chicago, and will be held in conjunction with Wizard World Comic Con Chicago taking place that weekend at the Donald E. Stephens Convention Center in Rosemont.

In addition, Simmons will select a young musician age 14 or under to meet Gene on stage and play a song during the concert.Area bands must submit video links to openingact@wizardworld.com, specifying "Chicago Opening Act" or “Rockstar Kid Chicago” in the subject line, by August 10for consideration. Simmons will select one group and one youngster, respectively, from among the entrants to perform on August 26.
The winners will be announced via media and on Wizard World social media channels on August 18, and notified by email and/or telephone. The winning opening act will also be posted on the Park West website and on its social media channels on that date.

The winning band should arrive at 6 p.m. on August 26 for soundcheck. They will be provided a dressing room and will likely take the stage at 8:30 p.m. Each band member will be invited to bring two guests at no charge. The “Rockstar Kid” should also arrive by that time.

"There is so much talent in Chicago and this is a great opportunity for regional musicians to be a part of a great event and showcase their talent at a classic venue," said Simmons, who will also appear at Wizard World Comic Con Chicago on Saturday and Sunday, August 26-27. "I'm looking forward to seeing some talented and enthusiastic bands to choose from for what will be a historic night."

Rules:
The winning bands must be able to perform a set of a minimum of 35 minutes.
The winning band must follow direction of event staff, and be professional at at all times.
Winning “Rockstar Kid” will play one song with Gene Simmons during his performance.
The decisions of Gene Simmons and Wizard World Management are final.

Wizard World Comic Con Chicago is also the place for cosplay, with fans young and old showing off their best costumes throughout the event. Fans dressed as every imaginable character – and some never before dreamed – will roam the convention floor and participate in the famed Wizard World Costume Contest on Saturday evening.For more on the 2017 Wizard World Chicago, visit http://wizd.me/ChicagoPR.

October 05, 2020
Rock and roll legends Guns N’ Roses have teamed with Jersey Jack Pinball--the American-made, #1 industry leader in pinball--to design their very own groundbreaking Guns ‘N’ Roses ‘Not In This Lifetime’ pinball game. The new Guns N’ Roses pinball game elevates the beloved American pastime--which is going through a resurgence worldwide--with innovative new technology, design and sound. The new Guns N’ Roses 'Not In This Lifetime' pinball game is made for players, collectors, and newcomers to pinball and is available now. An avid pinball collector and longtime player, SLASH worked hands-on with Jersey Jack Pinball designer Eric Meunier for over two years, to develop the Guns N’ Roses ‘Not In This Lifetime’ game. As co-designer, SLASH crafted specific game plays and actions, recorded guitar riffs, music, voice, and video for the new game as well as, four unique guitar features for four playable modes in the game. Pinball designer Eric Meunier is widely known as the designer of on
Post a Comment
Read more

October 16, 2020
Chadwick Boseman, who was diagnosed with terminal cancer in 2016, died in August without a will. Now his wife Taylor Simone Ledward has filed a probate case in Los Angeles, where she requested to be named administrator of his estate with limited authority, Page Six reports.Boseman’s estate is estimated to be valued at $938,500. The court docs say Boseman is survived by Ledward and his parents, Leroy and Carolyn Boseman. No other family is listed.Even without a will—and without children—as Boseman’s wife Ledward is set to inherit all the actor’s assets from his probate estate. It’s also likely that Boseman has more assets held in separate private trusts.The pair reportedly became engaged in October 2019 and married sometime in 2020. They were first seen together in 2015 after she graduated from Cal Polytechnic University Pomona in 2014. Boseman died on Aug. 28 of colon cancer. He was 43.Earlier this month, Boseman’s brother Derrick Boseman—a pastor from Murfreesboro, Tennessee—told the
Post a Comment
Read more