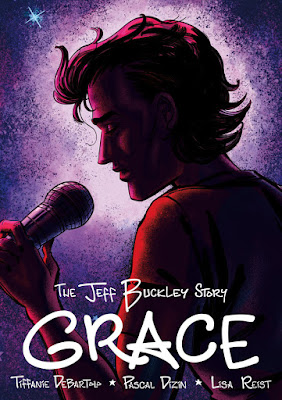 California, 1991. All his life, people have told Jeff Buckley how much he looks like his father, the famous ’60s folksinger he barely knew. But Jeff believes he has gifts of his own: a rare, octave-spanning voice and a songwriting genius that has only started to show itself. After he falls in love with a mysterious girl in New York, he sets out to make a name for himself outside his father’s shadow.

What follows are six turbulent years of music, heartbreak, hope, and daring - culminating in a tragedy that’s still reverberating in the music world today.

Written by Tiffanie DeBartolo, with art by Pascal Dizin and Lisa Reist, this graphic novel tells the heartfelt journey of Buckley - his rise from Sin-é and worldwide acclaim, to his settling in Memphis and accidental death - beautifully illustrated in a warm tone, to highlight his gracious personality juxtaposed with his horrific early end. “This story is more than just a story about Jeff’s life," DeBartolo explains. "It’s also a story about the impact his extraordinary talent and his eternal spirit has on everyone who discovers his timeless music.”

The biography uses archival material provided by Jeff’s mother, Mary Guibert, to reveal the young songwriter in the process of becoming a legend.