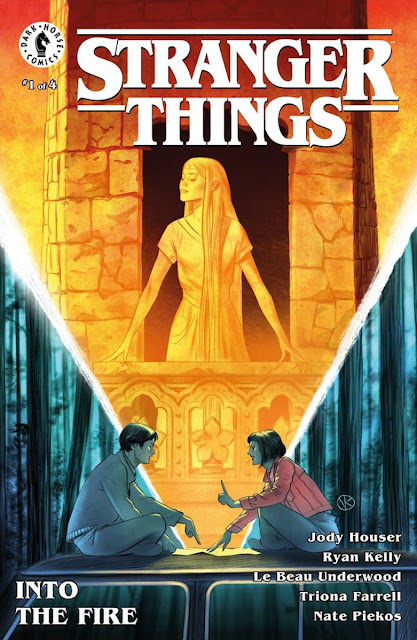 Netflix has yet to announce a premiere date for STRANGER THINGS 4. But until then, Dark Horse is hoping to hold fans over with a new four-issue comic book series set in the show’s universe. The publisher has just revealed plans to launch STRANGER THINGS: INTO THE FIRE early next year.
Into the Fire begins in 1984, one year before Stranger Things’ most recent season. It centers on two former Hawkins Lab test subjects who have been on the run ever since they escaped from Dr. Martin Brenner several years ago. Upon learning that the lab has shut down, they start searching for another one of Brenner’s victims, Nine. As if her destructive pyrokinetic abilities didn’t pose enough of an issue, Nine’s “shattered psyche threatens to burn them all to ashes if they can’t find her and free her from her own malevolent imagination.”


This obviously isn’t the first time that Dark Horse has played in the Stranger Things world. Last year, they kicked off Stranger Things: The Other Side, which recapped Will Byers’ time in the Upside Down during the show’s first season. They followed this up with Six, a prequel that focused on one of Brenner’s earlier test subjects at Hawkins Lab. Writer Jody Houser penned both of those volumes, and she’ll return for INTO THE FIRE. Houser will collaborate with an artistic team that includes penciller Ryan Kelly, inker Le Beau Underwood, colorist Triona Farrel, and letterer Nate Piekos.
Stranger Things: Into the Fire #1 arrives on January 8, 2020. Dark Horse passed along three different covers for the first issue, which you can view in the gallery below.