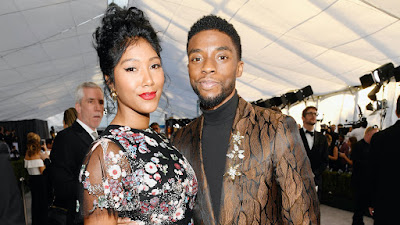 Chadwick Boseman, who was diagnosed with terminal cancer in 2016, died in August without a will. Now his wife Taylor Simone Ledward has filed a probate case in Los Angeles, where she requested to be named administrator of his estate with limited authority, Page Six reports.Boseman’s estate is estimated to be valued at $938,500. The court docs say Boseman is survived by Ledward and his parents, Leroy and Carolyn Boseman. No other family is listed.Even without a will—and without children—as Boseman’s wife Ledward is set to inherit all the actor’s assets from his probate estate. It’s also likely that Boseman has more assets held in separate private trusts.The pair reportedly became engaged in October 2019 and married sometime in 2020. They were first seen together in 2015 after she graduated from Cal Polytechnic University Pomona in 2014. Boseman died on Aug. 28 of colon cancer. He was 43.Earlier this month, Boseman’s brother Derrick Boseman—a pastor from Murfreesboro, Tennessee—told the New York Times about the conversation he had with Boseman the day before he died.Derrick recalled Boseman telling him, “Man, I'm in the fourth quarter, and I need you to get me out of the game.”Derrick realized what his brother meant. “When he told me that, I changed my prayer from, ‘God heal him, God save him,’ to ‘God, let your will be done,’” he said. “And the next day he passed away.”
WITIN RADIO · Interview: Heather Antos: Assistant Editor: Marvel Entertainment