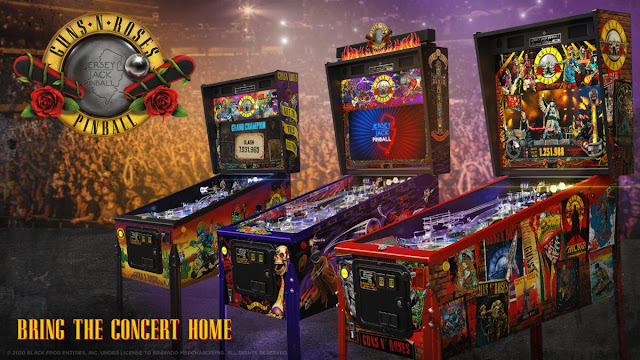 Rock and roll legends Guns N’ Roses have teamed with Jersey Jack Pinball--the American-made, #1 industry leader in pinball--to design their very own groundbreaking Guns ‘N’ Roses ‘Not In This Lifetime’ pinball game. The new Guns N’ Roses pinball game elevates the beloved American pastime--which is going through a resurgence worldwide--with innovative new technology, design and sound. The new Guns N’ Roses 'Not In This Lifetime' pinball game is made for players, collectors, and newcomers to pinball and is available now.An avid pinball collector and longtime player, SLASH worked hands-on with Jersey Jack Pinball designer Eric Meunier for over two years, to develop the Guns N’ Roses ‘Not In This Lifetime’ game. As co-designer, SLASH crafted specific game plays and actions, recorded guitar riffs, music, voice, and video for the new game as well as, four unique guitar features for four playable modes in the game. Pinball designer Eric Meunier is widely known as the designer of one of the best-selling pinball games of all time, Pirates of The Caribbean, which currently sells for $5-7,000.00 over its original asking price. With the new game offering the greatest rock and roll experience under glass, super-fans will now have a chance to own a piece of highly collectible rock and roll memorabilia.

"It's been a very fulfilling experience working with Jersey Jack on the new GNR Not in This Lifetime pinball machine,” says SLASH. “Jersey Jack pinball games are some of the most unique and beautiful pins ever made and I am honored to have been able to work with their brilliant team to design one of the most original and exciting rock 'n' roll pins ever produced. "

“To have this type of design work and participation from the game’s namesake creating the actual pinball game, has never, ever, been done before in the industry,” adds Jersey Jack Pinball designer Eric Meunier.

September 30, 2020
Ta-Nehisi Coates paid tribute to Chadwick Boseman in Wednesday's Marvel Comics . Coates began his eulogy with a quote from T'Challa from 2015's Secret Wars #7. "Death is just a different kind of journey…to the land that I am king of," the quote reads. WITIN RADIO · Interview: Heather Antos: Assistant Editor: Marvel Entertainment "In the Black Panther mythos, T'Challa often retreats to his City of the Dead, where all the previous kings and queens of Wakanda have been buried. There, T'Challa finds wisdom and counsel from his ancestors who have gone before," Coates continued, before explaining how he and Boseman's paths crossed when they were students at Howard University in Washington, DC.                                   "I got to watch him through the years — advancing out of student theater, on to TV and film, and then finally cast as T'Challa. He was perfect. He had T'Challa's royal spirit, the sense that he
Post a Comment
Read more