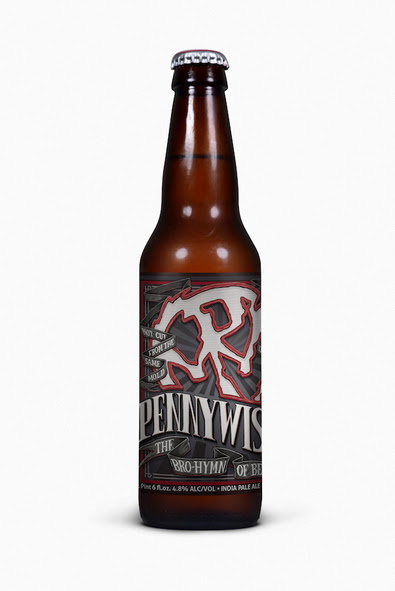 Known for their irreverence, independence, and doing things their own way, Pennywise remained true to their roots and their fans when developing Pennywiser, focusing on creating a unique brew that’s easy to drink and appeals to a wide range of beer drinkers. Pennywiser is taken to the next level by dry hopping it with Cascade, Crystal, Chinook and Citra hops, providing a citrus aroma and refreshing, hoppy flavor. The mild alcohol content (4.8%) of this Session IPA makes it the perfect beer to enjoy all day with friends.

The Pennywiser label features slogans familiar to Pennywise fans: “Not Cut From The Same Mold” (a lyric from the band’s defiant “Same Old Story”), “The Bro Hymn Of Beers” (a nod to the band’s trademark show-closing anthem that involves inviting much of the audience on stage with them), and “This One’s For You” (part of a “Bro Hymn” lyric).

Pennywise vocalist Jim Lindberg explains, “People have been coming at us for years to make a Pennywiser beer, but Lost Coast finally created a brew for us that got it right.”

"After 10 years of us talking about doing a beer, it's finally happening thanks to our good friends at Lost Coast Brewery,” says Pennywise guitarist Fletcher Dragge. “We've been trying to get this idea off the ground for awhile now, and to find a like-minded company with a DIY attitude of doing things their own way and not conforming to the usual corporate ways of the beer making world. This is about making a good tasting beer, with good people that have the same mentality as us, and bringing it to our fans…or anyone that likes beer for that matter. It's no secret that we drink beer, and that our fans like to knock back a couple cold ones as well. We hope we can deliver something that will bring some good times for all in the future.”

Pennywise drummer Byron McMackin says, "We couldn't be more excited to announce our partnership with Lost Coast Brewery and the launch of Pennywiser beer. We think Lost Cost is the perfect fit for our band and we can't wait for all of our Pennywise fans to taste it.”

Pennywise bassist Randy Bradbury sums things up: "Pennywiser is a great tasting, easy drinking beer…so go get some Pennywiser and enjoy with your friends!”

Lost Coast Brewery owner Barbara Groom says, "This is exciting for Lost Coast Brewery--our first major collaboration. We are looking forward to this new release and hope that Pennywise fans and all beer drinkers alike will enjoy.”

To celebrate the release of Pennywiser, the band will be hosting a special private tasting event in their Hermosa Beach, CA hometown on Friday, August 25. For a chance to win tickets to this intimate event, those 21+ can visit www.Pennywisdom.com.

Fans will have a chance to sample Pennywiser and see Pennywise live when they headline 91X Presents Ye Scallywag!, a day-long craft beer, food and music festival at Waterfront Park in San Diego, CA on Saturday, October 21. Tickets for Ye Scallywag! are on sale now at www.ScallywagSD.com.

Pennywise--vocalist Jim Lindberg, guitarist Fletcher Dragge, drummer Byron McMackin and bassist Randy Bradbury--formed in the South Bay of Los Angeles, a neighborhood with a rich punk rock history, in 1988, and have made a name for themselves as a politically minded melodic hardcore act who have sold millions of albums and become one of the most successful independent acts. The band has released eleven albums and amassed an international following through relentless touring and a high energy sound merging melodic surf punk, blistering hardcore and the classic punk of their youth. The group has solidified their place in punk history with songs like “Same Old Story,” “F* Authority,” "Alien," “Perfect People,” “My Own Country,” “Society,” “Straight Ahead,” and their legendary ode to brotherhood and departed friends “Bro Hymn.”

Lost Coast Brewery is an award-winning brewery located in Eureka, California founded by Barbara Groom in 1989. Known as “not just another craft brewery,” Lost Coast bottles up to 135,000 beers and fills 1,000 kegs every day, and has distributors in 21 U.S. states as well as Australia, Brazil, Canada, Costa Rica, France, Italy, Japan and Panama.