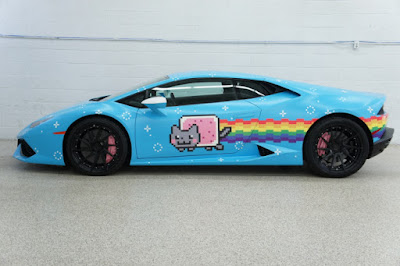 If you were ever to be in the market for a 2015 Lamborghini Huracán in your entire life, right now is when you should open up your coffers and purchase one of these exquisite supercars. That is because the 2015 Lamborghini Huracán owned by Deadmau5, properly named the “Nyanborghini Purracan,” is for sale! That’s right, the most internet-y, most meme-y Lamborghini on the planet can be yours for the low, low price of only $296,000!

The listing on Motion Endevours says the Purracan only has 2,724 miles on it, plus features Bianco Leda (white) on Nero Ade leather, front lift system and Magneto Rheological suspension, and 20″ ADV1 SL series wheels. Quizzically the listing also states that the “vehicle is currently wrapped, can be removed.” Why would you buy Deadmau5’s Purracan and then remove the iconic cartoon cat with a Pop-Tart for a body who is flying through space, and leaving a rainbow trail behind it? 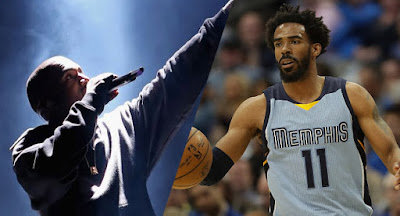 Kanye West has been pretty quiet this year. Unusually quiet in fact. But that doesn’t mean he isn’t keeping tabs on what’s happening, especially in the NBA, according to Memphis Grizzlies point guard Mike Conley.Speaking at the Grizzlies’ media day on Monday, Conley relayed a story about how Kanye randomly called him up one night around 12:30 to tell him what a fan he was of Conley’s play. “‘I just want to let you know I admire you, I really like what you do, I hate to see that you’re underrated,’ I mean just going through all these things like he actually watches me play,” said Conley. “He wasn’t reading off a paper or anything. He was just like ‘I think you could be up here and they just don’t see you like that.'”

Conley was obviously stunned by Yeezy’s unexpected praise, but was still cool enough to tell West, “I’m looking for a feature or something. Like put me in the background, sample some of my music.”