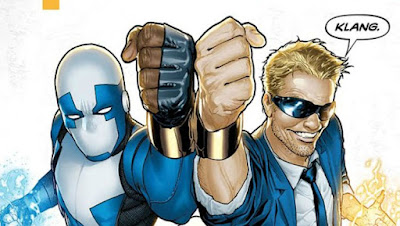 Ever since Valiant Comics reentered the comic book industry with a new incarnation in 2012, the company has attempted to follow its competitors to Hollywood and bring their creations to the big screen. And while it remains to be seen whether Bloodshot, Harbinger, and X-O Manowar will get their own movies, there’s at least one Valiant title that has a good shot at coming to television: Quantum & Woody.

The Wrap is reporting that Anthony and Joe Russo have signed on to develop Quantum & Woody as a TV series, after they finish Avengers: Infinity War and its currently untitled sequel. The Russo brothers are also coming off the highly successful Captain America sequels, and they have a history of directing comedies for television like Arrested Development and Community. Given their background in comedy, it’s fitting that their new project is considered to be one of the best superhero/comedy comics.


As envisioned by writer Christopher Priest and artist MD Bright, Quantum & Woody were a pair of interracial adoptive brothers who had a strained relationship with each other at best. While investigating their father’s death, the brothers were accidentally given superpowers. However, the drawback of those powers is that they had to touch each other’s wristbands every 24 hours or they would both die.

Valiant has jokingly called Quantum and Woody “the world’s worst superhero team,” but there was quite a lot humor in the original run by Priest and Bright, and the series won critical acclaim. More recently, James Asmus and artist Tom Fowler re-envisioned Quantum & Woody with a new modernized take.

The Russos won’t be the only Marvel veterans working on the potential TV series. Ant-Man and the Wasp screenwriters Andrew Barrer and Gabriel Ferrari have also signed on to write the pilot episode and executive produce the show. A network isn’t currently attached to produce Quantum & Woody, but the Russos’ involvement with the project means that it will likely find a home somewhere.